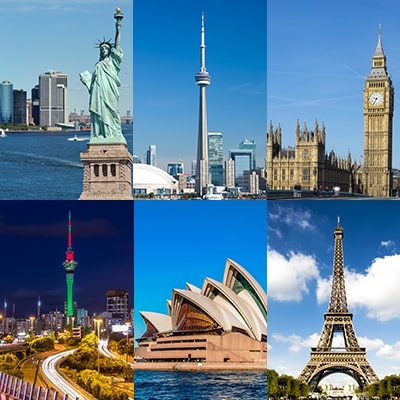 The US is home to 4000+ Universities and 16 of the top 20 Universities in the world are located here. This is the place where you get the highest possible education. Also the U.S. universities are world leaders in terms of technology and scientific techniques, and are committed to providing the same resources to students.

The U.S. Education System offers many flexible options to the students to choose various courses before you can officially choose your major during your second year of study. This approach would give ample time to discover and understand your interest areas to decide what you want to do and pick your pathway.

A Degree from a US university will open the door of opportunities across the entire world. Being the technology powerhouse of the world, the U.S. itself offers several career opportunities for International Students.

U.S. Universities offer many programs with CPT/OPT options which let international students work on/off campus while pursuing their education. This not only helps students with experience, but helps them support their education as well.

The flexibility of American education is one of the best in the world. Many options are available in one particular field of interest itself. Students have unlimited choices and the freedom to specialize in rare and specific areas.

The education meted out in the United States is often focused on the practical aspects of teaching thereby creating an environment that will enhance the powers of a student’s problem-solving skills and thinking abilities.

Canada stands to be a country with high demand and growing popularity among students. It is growing to be most popular with Indian students over the years, the number of students heading to Canada to study at one of their colleges/Universities is growing every year.

Canada is high on academic quality and maintains affordable tuition costs, the attractive post study work rights add up to benefits of studying in Canada. It also offers excellent immigration opportunities. One can earn while learning in Canada.

Canada has witnessed a tremendous growth in the number of international education aspirants over the years and this is increasing every year. According to a UN Survey, Canada has been rated as one of the most preferred countries in the world to live consecutively for nine years. It is known for its peaceful, friendly, secured and compassionate environment. The country believes in equivalence, diversity, admiration and tolerance for all individuals just as mentioned in the Canadian Charter of Rights and Freedoms and the Canadian Multiculturalism Act. Canada is one of the best international education destinations and is also recognized as one with the safest study environment offering high quality of life and education.

It is known for academic excellence, research opportunities, cultural diversity among others. Students in Canada explore the practical course atmosphere, the colleges in Canada have a blend of theoretical and practical modules as part of their course curriculum. Students get to opt for co – op curriculum, which allows students to gain hands-on experience while being a student through internships.

Canada offers programs across all specialisations and at both Undergraduate and postgraduate levels. Students who do not stand a chance to apply for Masters basis academics, can take up Graduate and Postgraduate diploma courses.

It is among one of the most scenic countries in the world with picturesque locations. A safe and peaceful atmosphere awaits students in Canada.

The most famous country amongst international students, the UK offers quality education, practical knowledge, career opportunities, and a rich culture waiting to be explored.

The UK’s reputation and legacy as a world centre for scientific research makes it a magnet for some of the very best thinkers in the world. With only one per cent of the world’s population, the UK is responsible for eight per cent of global scientific publications.

The Education Systems in the UK is world renowned for its high quality and standards. A degree from UK University is much appreciated and has recognition around the globe.

The unique blend of practical and theoretical course curriculum makes it a great choice for students from around the world. The United Kingdom is home to 4 of the top 10 Universities in the world.

UK universities are known for their academic excellence among many other specialities. Studying in the UK comes with a package of getting to experience the beauty the UK has to offer alongside getting a qualification that is recognized around the globe.

The United Kingdom attracts a number of International students every year to its campuses across the country. One can find close to 120+ nationalities on a UK University campus. According to the latest higher education statistics, there are currently 485,645 international students enrolled in one of the many universities in the UK.

The UK universities offer a wide range of subjects like business, Engineering, law, medicine, arts etc., Students experience a diverse and multicultural environment in the UK. UK Universities offer a unique blend of practical and theory based course curriculum, the state of the art infrastructure and research facilities makes it a perfect choice for students.

Why Choose the UK?

New Zealand is usually known as a beautiful country, that’s not all that this country is known for. It is also a student destination, which offers courses like Business, Management, IT, Computing, Agriculture etc.

New Zealand has many world class multinational companies and industries which create a massive demand for a professional, highly educated and diverse workforce, it is truly the land of opportunity. This demand for educated professionals has fueled the growth of many first-rate institutes and universities all over the country.

These institutes primarily focus on preparing their students for the job market by integrating real life, industry oriented projects/internships into their carefully crafted course curriculums. Great emphasis is placed on constantly updating and revising the structure and content of their courses to suite the rapidly evolving demands of various different industries across a broad spectrum of specializations

Its quality education system and world recognised degrees are sought after. It is a safe and peaceful nation with strong academics.

It offers globally recognised degrees, which has great value in job markets.

New Zealand is quite known for its research opportunities, with immense research facilities in different sectors one can do a PhD in New Zealand and pay the same fee as locals and work full time while doing his research, unlike other students where they need to work part time while studying.

Australia is one of the popular destinations for students, it has been a student destination for many years and continues to be one.

Education in Australia spells international success. Over 1,000,000,000 people around the world rely on Australian discoveries and inventions every day which include — * Penicillin, *IVF, *Ultrasound, *WiFi, *Bionic Ear, * Cervical Cancer Vaccine, *Blackbox. Australian Universities produce truly global citizens ready to take on the global world with a world of confidence and knowledge. Australian Universities have produced many eminent scientists, designers, educators, entrepreneurs and many who have changed the world, winning awards from Oscars to Nobel Prizes. Their global achievements include the “black box” now on every airplane, the Earth hour initiative, and the invention of Wi-Fi.

Every year, thousands of students choose to study in one of the Australian cities, Major city Melbourne has been voted most livable and student friendly cities in multiple surveys.

Engineering, Accounting, Nursing are some of the popular courses in Australia, which see high job demand. Australia hosts 8 of the top 100 Universities in the world. Australian education is distinguished by the Australian Qualifications Framework.

Tuition costs in Australia are low when compared to the USA (which stands to be the most popular destination for Indian students so far). Postgraduate, Undergraduate, MRes, Phd’s are most sought programs in Australian Universities.

A student is allowed to work 40hrs part time per fortnight in Australia, this has been a good source to earn living costs.

The post study work rights are up to 4 years (varies from region to region). This allows a student to gain practical exposure in Australia and experience Australian work culture. Students experience nature’s bliss while in Australia, surrounded by beaches and beautiful locations it is a paradise on earth.

Australia sums up to be an all in all package for a student.

Europe is one of the favourite destinations for all travellers and students across the world. With a 100% Visa success rate, Go Overseas Consultancy provides the best offer to students to study in countries like France, Italy, Germany etc. Europe as a continent is known for its panoramic effects with scenic landscapes, classic museums, mediterranean beaches, vast palaces etc. showcasing the continent’s cultural and historical backdrop making it one of the most sought after destinations.

The educational system in Europe is highly acclaimed and recognised worldwide. Universities across the continent are well calibrated in a systematic manner integrating both theoretical and practical knowledge into account and the course curriculum designed in a way to prepare a student for the real world. Studying in Europe is a package as it opens up many doors of job opportunities as well as exploring the scenic landscapes while you get a degree from recognized institutions. Europe attracts a sufficient number of students from over the world with universities imparting academic excellence and experience that stands firm in the real world.

The state of art campuses, historical infrastructures, modernized facilities and the technological advancement of the European countries plays an important role in attracting students from various corners of the globe. A degree from European universities is much appreciated and recognised around the world for its advancement in many resourceful fieldslike research, technology, business management, fashion, literature etc. Universities in Europe contribute a substantial amount in delivering the guaranteed success rates, attracting students to become a part of the courses and providing them with the opportunity to build a flourishing career ahead.